On November 1st, 1953, the Town Council was granted a charter by the Canadian General Council of the Boy Scouts of Canada Association to act as a sponsor for Scouting in Baie d'Urfé.  That same year the Baie d'Urfé Horticultural Society offered gardening instruction to the Cubs and Scouts, given them the opportunity to earn the gardening badge.
The first Cub and Scout meetings were held at the Town Hall but were quickly moved to the Coop shortly before the Cubs were moved again to St-Georges Church in Ste-Anne-de-Bellevue where they were still meeting in 1960 when David Moore was the assistant leader to Jean Vauthier, the Akela at the time; the Scouts continued at the Coop. The first Cub packs would meet with the Ste-Anne's pack in the basement of St-George's Church under Mr. Stevenson. Mr. Stevenson was also the first leader of the Baie d'Urfe pack until Reg Avey and George Lothian were qualified. The number at the start was likely only 20 or so.
(David Moore, East Sooke BC)

The Chicken Coop was purchased around that time and from then on became the centre of Scouting activity for residents.

Early picture taken in 1953 by Reg Vidler at the Town Hall. 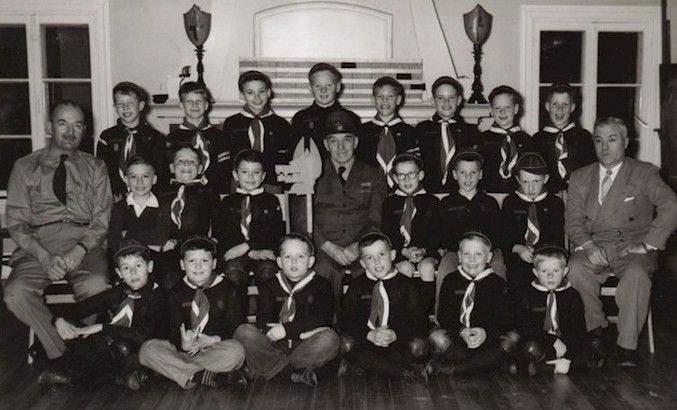